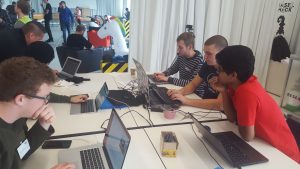 Am 28. + 29. Okt. 2017 fand zum ersten Mal der Basel Hack Event 2017 auf dem Campus der HGK der FHNW am Dreispitz in Basel statt. Der BaselHack bietet eine Plattform für Zukunftsdenker, kreative Köpfe, Technologie-Enthusiasten, UX/UI-Cracks, Script Kids, Softwareentwickler und EDV-Veteranen – also für alle, die gerne gemeinsam Ideen und Lösungen entwickeln. Stephan Jüngling vom IWI war vor Ort. Ein Besuchsbericht von ihm: At the beginning of the Basel Hackathon 2017, there were 14 pitches, finally resulting in 11 teams, the smallest team containing two persons, the largest team ten. The aim was to mix people with miscellaneous backgrounds having innovative ideas from many different areas. There were the hardware related hackers inspired by the IoT, who searched for innovative solutions for dimming the light by using Arduino and MOSFET transistors. Then there was the team “beervelopers” who used the Ionic Framework to build a small application to measure and visualize the beer consumption from a Kegbot I/O sense beer dispenser. The latter was – of course frequently used during the final apéro after two days of creative hacking, which was hard work indeed but also a lot of fun, and with networking and discussions. Yes, people really worked hard and focused on the 1st floor of the FHNW Campus at the HGK in Basel. The event started on Saturday morning with the initial pitching sessions to promote the ideas and to find team members willing to contribute their creativity and skills to develop a working prototype. This prototype was shown 32 hours later during the final presentation, which started on Sunday at 4 o’clock p.m. Fortunately, switching from daylight savings time back to regular time provided an additional hour of sleep or work! (One of the developers only slept an hour, and on Sunday morning at 6 o’clock two participants were still working, one of them with a Microsoft HoloLens, tapping the air using the well-known augmented reality gestures). Many different ideas were related to the use of open data from the area of Basel to build practical helper applications, largely related to various transport problems or their visualization. It was very interesting to see the big enthusiasm with which the hackers built prototypes that help to make simple decisions, e.g. which tram to take; or apps that visualize time dependent traffic density with the help of heat maps. There were many different challenges to face, from the technical implementation details about how to download and process the velocity data of 16 million cars on the 400 streets of Basel to the problem that the frontend developer was no longer part of the team on Sunday and the backend developers had to take over his part. There is also quite a large innovation in the different hacking projects to contribute to different social application scenarios. For example, the Blink team who developed an application using React as frontend and Spring as backend framework to build a mobile application that can be potentially used by 500’000 people in Switzerland and many partner organizations that are involved in mobility services for handicapped people to connect volunteers, available resources and requesters. The winning team “clockchain” focused on our aging society and drafted a solution based on blockchain technology to collect hours of volunteer work of still active individuals. These hours they could then consume when they are older themselves and need help from the younger population of the participants of the community. It was great to see students and lecturers from the FHNW BIT as well as from the Wirtschaftsinformatik course of studies – including a BIT alumni student of the first generation who graduated this autumn – take part in the event, be it as participants, be it in the organization committee or as coaches. We are all looking back at a successful first run of the Basel Hackathon and looking forward to its next run in 2018. Mehr Informationen: https://www.baselhack.ch/ https://www.facebook.com/BaselHackathon/ Text und Bild: Stephan Jüngling
Diese Seite teilen: Auf LinkedIn teilen Auf Facebook teilen Auf Twitter teilen Auf Xing teilen Via E-Mail teilen
zurück zu allen Beiträgen